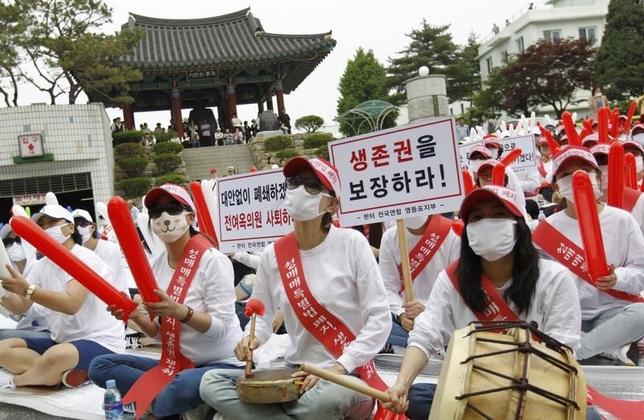 Prostitutes attend a protest against the police’s crackdown on brothels in Chuncheon, about 100 km (62 miles) northeast of Seoul May 31, 2011.
Reuters/Lee Jae-Won/Files

South Korean activist prostitutes said on Thursday they would appeal to the United Nations to win back their right to work after the Constitutional Court rejected a petition to overturn a law that punishes sex workers.

Prostitution is illegal in South Korea but was generally tolerated in the conservative, Confucian country until a 2004 law set out punishments for both prostitutes and customers of up to a year in jail or a fine of up to 3 million won ($2,600).

The court on Thursday struck down an appeal by a prostitute convicted under the law, saying prostitution was “greatly harmful to the society” and needed to be eradicated.

Prostitutes should be found new work, the court said.

Activist sex workers say very few women are forced into the job and the 2004 law violates their right to work.

“We are people and workers just the same,” Chang Se-hee, a member of a prostitutes’ activist group, told a news conference after the court’s decision.

“We will not surrender to this ruling but will form a sex workers union and go all the way to the United Nations.”

Another activist, Kang Hyun-joon, said their group planned to make an appeal to the U.N. Commission on Human Rights. He did not elaborate.

Activists say government-backed programmes to find prostitutes new jobs are unrealistic. Critics of the 2004 law say it has pushed the sex trade underground.