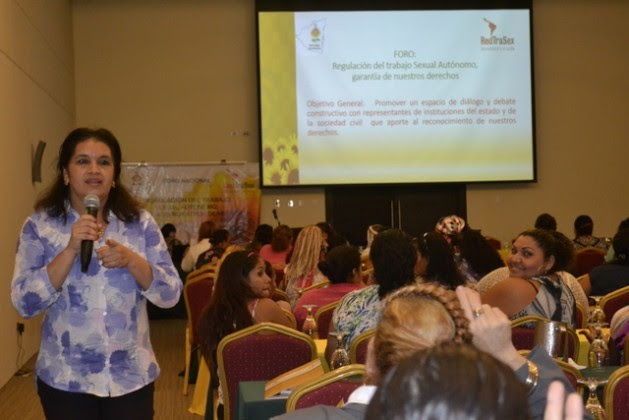 María Elena Dávila, national coordinator of the Nicaraguan Sex Workers Network, participating in a workshop on the Regulation of Sex Work in this Central American nation. Credit: Courtesy of RedTraSex

MANAGUA, Jun 13 2015 (IPS) – After living in the shadows, thousands of Nicaraguan sex workers have broken their silence, won support from state institutions and gained new respect for their rights.

María Elena Dávila, national coordinator of the Nicaraguan Sex Workers Network (TraSex), explained to IPS that after 15 years of quietly organising, women who provide sexual services for money have managed to become “judicial facilitators” – a kind of conflict resolution mediator – in the Supreme Court and Health Ministry promoters of sexual and reproductive health.

They have also been incorporated into the Defensoría de Derechos Humanos or ombudsman’s office, and they now have a special prosecutor protecting their rights.

In addition, they were recently invited to receive training in political rights and to work as temporary employees for the Supreme Electoral Council in the 2016 general elections.

“This invitation to receive training on electoral matters empowers us to defend our rights vis-à-vis political parties and candidates,” Dávila told IPS.

The Nicaraguan branch of the network was founded in Managua in November 2007 with the support of local non-governmental organisations and social assistance funds from aid agencies.

The seed of the organisation was the Sunflowers Sex Workers Association, which initially brought together 125 women who starting in 1997 went to informal trainings and lectures on health and sex education.

In 2009 the government’s Office of the Human Rights Ombudsman (PDDH) signed an agreement for cooperation and assistance with the organisation, which began to gain visibility, influence and respect.

“The other women, the ones outside the network, are still wary of the organisation or are unfamiliar with our aim to provide support,” said Dávila. “But we’re working to train them in defence of their rights as women and sex workers.”

Pajarita from Nandaime (not her real name) is one of the sex workers who reject any kind of organisation among her colleagues.

“I take care of myself and I don’t trust groups or associations,” the 27-year-old told IPS. “Those women get involved in that for money, to get dollars, and then they forget about you. This life has taught me that among prostitutes there is no friendship, only competition.”

She arranges daytime appointments over the phone, working in Managua motels, and is studying tourism in the evenings. On the weekends she goes back to Nandaime, her hometown in the eastern department (province) of Granada, 67 km from the capital. 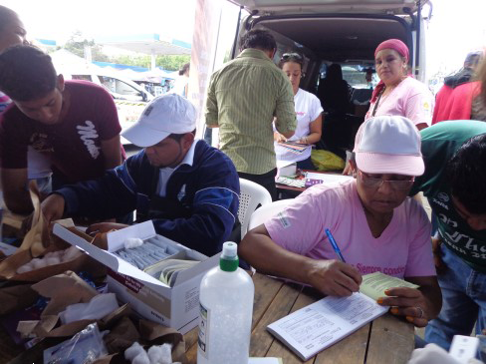 Sex workers in Nicaragua taking part in activities to combat the spread of HIV/AIDS, like this health fair organised by the Nicaraguan AIDS Commission. Credit: Courtesy of RedTraSex

But the organisation is making headway in public institutions. The national legislature is now an ally, listening to their input when designing laws that relate to labour and social conditions of sex workers.

Carlos Emilio López, a national lawmaker who is vice president of the legislative Commission on Women, Children, Youth and Family Affairs, is one of the public officials who support the network.

“They are brave women putting up a struggle,” López told IPS. “They have historically been stigmatised and discriminated against, and now they are demanding the attention they have never been given. The state is in their debt, and it’s time they were given something back.”

In April, the vice president of the Supreme Court, magistrate Marvin Aguilar, presided over a ceremony where a pilot group, made up of 18 members of the network, received their credentials as judicial facilitators.

He explained at the time that the women were given technical and legal training to help manage conflicts through dialogue, as mediators.

In May, the national police named a special chief to directly address the demands for safety voiced by the TraSex network and issued an institutional guideline for their complaints of domestic abuse and general violence to be addressed with the full force of the Integral Law Against Violence towards Women.

In the past, sex workers constantly complained about abuse of authority, harassment, discrimination and persecution by the police.

Their new relationship with the different branches of government enabled the TraSex network to have a say in the design of Nicaragua’s new Law Against Trafficking in Persons, which went into effect in April.

The original draft of the law linked prostitution and procuring with the crime of trafficking, while stressing that women, including prostitutes, were the main victims.

According to Dávila, associating sex workers with trafficking as both victims and victimisers did them harm. As a result, the network recommended modifying the text, the proposed change was accepted, and the connection between sex work and trafficking was removed from the law.

Reflecting their empowerment in Nicaraguan society, on Jun. 2 the network publicly celebrated for the first time International Sex Workers’ Day, annually acknowledged by sex worker networks and activists across the globe since 1976 in commemoration of a protest by prostitutes a year earlier in Lyon, France against the discrimination and police harassment they suffered.

In 2014, in a public ceremony covered by the media, the network presented the book “Ni putas ni prostitutas, somos trabajadoras sexuales” (Neither whores nor prostitutes, we are sex workers), containing first-hand accounts of four women talking about what it is like to be a sex worker and discussing their hopes for a better life.

In addition, since 2014 sex workers have held a voting seat on the Nicaraguan HIV/AIDS Commission, and have participated, also with both voice and vote, in the national HIV/AIDS coordinating committee, where official institutions, social organisations and international bodies design anti-HIV/AIDS actions.

Despite the progress they celebrate, Dávila acknowledged to IPS that social discrimination is still a problem and that there are “many battles to fight” in this impoverished Central American nation.

One of them is to establish lines of communication with the Education Ministry, to teach sex workers to read and write or help them finish school, and to protect their children from bullying by teachers and students, which is frequent when their mothers’ profession is discovered.

Another battle, said Dávila, is to engage in dialogue with the legal system authorities so the new Family Code, in force since April, is not used by judges to remove the children of sex workers from their mothers because of the work they do.

“Right now we have several cases of mothers who are sex workers, where the authorities want to take their daughters away because someone reported the work they do,” she said.

Edited by Estrella Gutiérrez/Translated by Stephanie Wildes
Taken from: http://www.ipsnews.net/2015/06/sex-workers-in-nicaragua-break-the-silence-and-gain-rights/